When you play a game against the CPU you control the Ball speed, the CPU speed, and the Player speed, as it is displayed in the next screenshots. 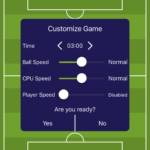 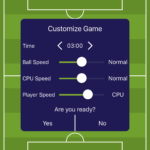 Even though when you change the CPU speed you do not make the CPU “smarter”, you do increase the level of difficulty, because you need to act faster (or slower).

The default CPU speed is at the normal level. But, there are 4 more levels to select from:

In addition to the above changes in the CPU speed, in the versions 1.2 (Android), and 1.4 (iOS) we added the dynamic CPU speed. This means that if you play at one level (i.e., Very slow), and you are getting really good at it, the CPU speed may be higher than the Slow or even the Fast level.

The default Player speed is disabled, i.e, no restrictions. But, there are 3 more levels to select from:

Enabling the Player Level will make the game a little harder to beat the CPU, but certainly more interesting. You have full control on the Player level, and the default value is disabled. But, do try to test your skills on the other 3 levels.